The RAF Red Arrows return to Menorca in 2018

The RAF Red Arrows are to return to Menorca on the 18th September 2018.

The RAF display team have published their full 2018 itinerary on their website including a wonderful display in Menorca.

They were last here in Menorca back in 2014, when they wowed the crowds over Mahon Harbour with a truly spectacular display.  This year they will be flying over the south coast, so expect some outstanding photo opportunities.

The exact location is En Caragol which is between Punta Prima and Binibeca, the display commences at 13.30 hours.

The Red Arrows Wing Commander Andrew Keith has said: “Preparations continue for the Red Arrows’ 2018 season, when the team will play its part in marking the Royal Air Force’s centenary year and aims to inspire all those who see our displays.”

The Royal Air Force Aerobatic Team, known more commonly as the 'Red Arrows', are one of the world’s premier aerial aerobatic display teams.

Representing the speed, agility and precision of the Royal Air Force, the team are the public face of the service. They assist in recruiting to the Armed Forces, act as ambassadors for the United Kingdom at home and overseas and promote the best of British.

Flying distinctive Hawk fast-jets, the team is made up of pilots, engineers and essential support staff with frontline, operational experience. Together, they demonstrate the excellence and capabilities of the Royal Air Force and the Service’s skilled and talented people.

With their trademark 'Diamond Nine' shape and combination of close formations and precision flying, the Red Arrows have been displaying since 1965. Based at RAF Scampton in Lincolnshire, England, the Red Arrows will have flown almost 4900 displays in over 57 countries, by the beginning of 2018.  They truly are a respected asset to the United Kingdom.

Here is a photo of some of the 'Reds' taken when they were enjoying an event on the Isla del Rey, in Menorca a few years ago. 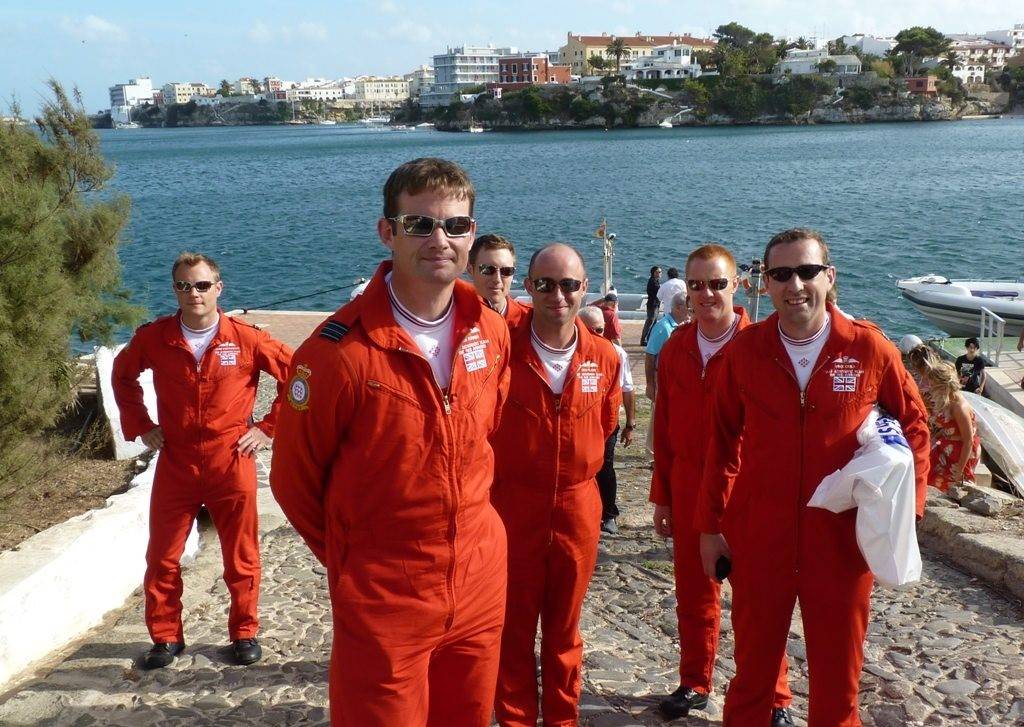 All material on https://www.boatshopmenorca.com belongs to BoatShop Menorca S.L. and is protected by intellectual property rights as stated in the LPI. Any unauthorized use is expressly understood as a violation of these rights and could lead to appropriate sanctions. It is, therefore, reproduce, use, modification, distribution and public dissemination of the contents of this website without permission of the author perceptive.

The data provided through the Web are stored in a data file owned by BoatShop Menorca S.L. has been declared, as is perceptive in Spanish Data Protection Agency. The purpose of this information is solely for the recruitment of the requested service and for subsequent notification of promotions or services within the company itself. In no case be transferred to third parties or companies, except those required by law or associates of BoatShop Menorca S.L.. The files may be processed by companies responsible for data processing and web hosting. These suppliers have signed service contract committing themselves to the same treatment conditions imposed by BoatShop Menorca S.L. as required by the Data Protection Act.

You agree that the law governing the operation of this service is Spanish. Any dispute concerning the interpretation or application of these provisions shall be the responsibility of the Courts of the consumer. If Customers outside the Spanish state courts competent are those of Menorca.